NOW WHERE WAS I?
After having to pause for the passing of both Derrick Ferguson and Felix Silla over the last couple of weeks, it's good to get back to a regular Progress Report for a change.
I did have to stop and write a memorial for an upcoming tribute book to Derrick.
Otherwise, worked on my SCIENCE FICTION PROJECT this past week.
Have 22 Chapters plus a Prologue and over 42,000+ words so far.
Am working toward 60 to 65,000 so obviously will be reaching the climax and at least some resolution(s) soon since I'm hoping this novel will just be the first episode of a long ongoing series. 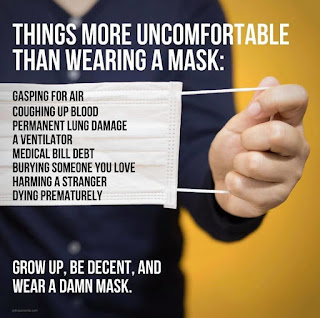 The only other news I have is on the personal front.
I have received my second COVID-19 Vaccination shot over a week ago and feel terrific!
No side effects. No microchips or mutations.
So what the {censored} was all the fuss and other BS about?
But I still intend to keep wearing my mask in public until everyone is vaccinated and there is a global "All clear!"
Even against all the (un)known variants lurking about.
In any event, I better get back to writing now.
Take care.
STAY SAFE! 😷
And I'll see you around the Internet.
Lee Houston, Junior
25 April, 2021

Posted by Lee Houston, Junior at 1:12 PM No comments:

Man, I seriously hate obituaries!
Last week it was Derrick Ferguson's.
This week it's Felix Silla!
For those (few) unfamiliar with the name, Silla was an actor/stuntman who will go down in Entertainment history for many things, including originating the roles of Cousin Itt on The Addams Family and Twiki on Buck Rogers in the 25th Century.
I had the pleasure of meeting Mister Silla at the 2012 Pulp Ark Convention.
There we had a couple of chats over his long and distinguished career, to date. 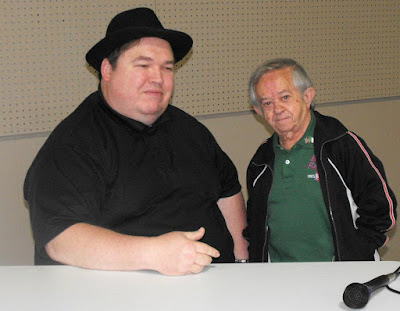 Among other things, he appeared in an episode of The Monkees TV show ("Monkees At The Circus"), and was a hang gliding Ewok in Star Wars: Return of the Jedi.
But Silla personally considered his favorite role to be Litvak in the George Segal movie The Black Bird because it required the least make up/costume prep time, compared to dressing up as Itt, Twiki, etc.
That was definitely a fun weekend and convention. Clicking the link above will reveal more details of the experience.
The impression continued long after I returned to my humble abode, for I not only dedicated HUGH MONN, PRIVATE DETECTIVE: CATCH A RISING STAR to Felix, but I also based the character Salexi Lilf of Stellar Studios, who first appears in Chapter 17, on him.
I honestly don't know if Silla was ever aware of that, but I hope he enjoyed it.
In any event Dear Readers, I thank you for indulging me on another trip down Memory Lane.
My writing is going as well as can be expected at the moment considering recent events.
Take care.
STAY SAFE!😷
And I'll see you around the Internet.
Lee Houston, Junior
18 April, 2021

All links were active when posted.
Posted by Lee Houston, Junior at 10:24 PM No comments:

IN MEMORY OF DERRICK FERGUSON

For those expecting to read my regular PROGRESS REPORT today, know that my writing is going well, but for now it's time to pause and remember a friend...
I have been informed that we've lost Derrick Ferguson April 4, 2021.
For those who have never met the man or read any of his works, I feel sorry for you.
I had the pleasure of meeting Derrick at the very first Pulp Ark Convention back in 2011. Before then he was just a cool guy on the Internet who had a few works already published by that point.
Derrick wasn't really a complicated person.
What you saw was what you got.
Open, honest, friendly.
Always willing to talk, and not just about whatever was on his knowledgeable mind. Your thoughts and opinions on any subject were just as important.
It didn't matter who you were, for the man never saw anything except the person in front of him.
That in and of itself is a rare quality that we certainly need more of in today's world.
And he certainly could write!
His Dillion series alone is a prime example of the man's talents, but that's far from the only work he was capable of, as you can see by reviewing his Amazon listings.
Yet, in his own way, Derrick was also humble.
One consistent story related about him is the fact that Derrick never expressed or had any real interests in how well his books were selling.
What mattered to him was how well readers liked them. What they thought of his past efforts and potential interests in what was next, whether it would be another novel, short story or blog post.
That attitude certainly helped me out early in my career because, and I hate to admit this, but I was looking at the concept of success the wrong way myself back then.
Anyway, after that Pulp Ark, we exchanged posts and comments throughout the years since then until hearing the news that prompted writing this blog entry today.
Derrick Ferguson was certainly one of a kind both in person and on the printed page.
His presence in any medium will be sorely missed.
Lee Houston, Junior
11 April, 2021
Posted by Lee Houston, Junior at 1:29 PM No comments:

Okay, just a quick shout out to all my peeps readers and fans that I hope you and yours are having a safe😷 and otherwise fun Easter weekend.

Have gotten back to where I left off on the SCI-FI PROJECT and while I am taking today off for obvious reasons, will resume work tomorrow (April 5) to finish that novel.

Consulted a few times with My Friendly Neighborhood Beta-Proofreader Nancy Hansen, who's also a member of Team Blue, as we strive to get that memorial project for Mark Halegua together.

All of this, PLUS I've been informed of an open submission call coming up for a major publisher that I plan to submit a short story to.
So, other than taking care of the Sunday Funnies on The Free Choice E-zine today, I'm going to be one busy writer the rest of this week.
In any event, take care.
STAY SAFE!😷
HOPPY EASTER!
And I'll see you around the Internet.
Lee Houston, Junior
4 April, 2021

Posted by Lee Houston, Junior at 11:15 AM No comments: